Tokyo, Japan – October 3, 2018 – Broad Street Licensing Group, a world leading food & beverage brand licensing agency, announced that it has brokered a major retailer exclusive with Walmart Japan/Seiyu for client Tony Roma’s. The launch today in Tokyo will include Tony Roma’s classic menu items such as ribs, pulled pork, and seafood items like shrimp & salmon, along with their classic BBQ Sauces. In addition, a new “Tokyo Sauce” has been developed especially for this program by the Tony Roma’s Executive Chef, Bob Gallagher. The licensed food items will be available in Seiyu’s 350 stores starting tomorrow, October 4th, throughout Japan. In addition to Seiyu’s bricks & mortar stores, the line will be carried by Rakuten, Japan’s #1 online retailer. Wally Bockl, VP Merchandising Fresh Foods at Walmart Japan, said “the biggest reason we launched these Tony Roma’s items is to leverage the global partnership with our parent company Walmart. These Tony Roma’s items and others are already available in US and in Mexico. This allowed us to collaborate with this highly-popular global restaurant.”

Tony Roma’s is also celebrating its 40th anniversary of the opening their first franchise in Tokyo in 1978. Since then, Tony Roma’s has expanded to over 30 countries around the world. In honor of this achievement, Tony Roma’s Executive Chef Bob Gallagher has developed the unique “Tokyo Sauce” that will be available exclusively at Seiyu. Tony Roma’s licensing program was recently nominated for Licensing Industry Merchandisers’ Association (LIMA) 2018 Best Food & Beverage/Restaurant Brand Award. Brad Scher, Chief Executive Officer for Tony Roma’s, said: “we’ve teamed up with the best retailer in the country to bring our products to consumers in Japan. The Walmart group is a great worldwide partner, and we currently sell our products in their stores in the United States, Mexico, and now Japan. We are honored to be the first restaurant brand featured at Walmart Japan/Seiyu, and we are pleased to be able to share the same values of product excellence like we do in our restaurants in meals meant for the home.”

Carole Francesca, President of Broad Street Licensing Group, said: “Our client is a global restaurant brand, and we’re proud of our work expanding the leading barbeque brand into the Japanese territory. Working with Walmart Japan/Seiyu will be a great opportunity to bring classic American barbecue to the Japanese consumer.” The program was spearheaded by Bill Cross, Broad Street’s SVP of Business Development, working closely with Satoshi Makino of Walmart’s Perishable Division in Japan. Romacorp, Inc., is the parent company of Tony Roma’s restaurants, the world’s largest casual dining concept specializing in ribs. Headquartered in Orlando, Florida, Romacorp, Inc. has more than 150 restaurant locations in more than 30 countries and is one of the most globally recognizable names in the industry. For more information about Romacorp, Inc. and Tony Roma’s, visit http://www.tonyromas.com/.

END_OF_DOCUMENT_TOKEN_TO_BE_REPLACED 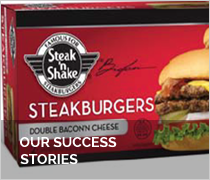